Hobby wise not much has happened this week. But this weekend however, I got some time over and spent it on painting. The painting goals I had for last month did not happen - safe to say. xD But today and yesterday I at least finished of the plaguebearers (and get all the material I need to make a painting guide ^^), 10 bloodletters, the last pink horror (one sneaky one had hidden - noticed after finishing the other ones that there were only nine of them) and gotten started on the Herald of Khorne. 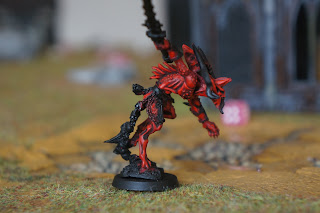 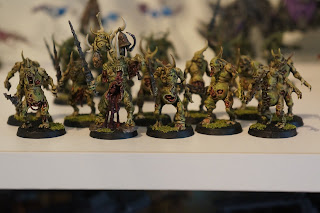 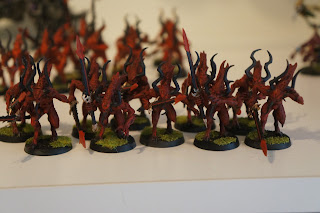 I love that I chose to speed paint my daemons. I get to feel that I have accomplished something when it comes to painting and not just paint one models a week or whatever. Also playing with/against painted modes is way better than against/with grey ones. =)


Posted by TheWarhammerLady at 10:29 5 comments:

Today I started my day with reading the new White Dwarf. Yes, I know that most people I talk to do not like the White Dwarf very much but I have to say that after they redid it and released to iPads then it really has improved. I very much like how I can look at many of the models and be able to zoom in and rotate them. That's by far the best part!
Anyways, I was looking through the new range of High Elves, quite impressed with some of the releases - especially the phoenixes. Those are the kind of models that I'd buy just to assemble and paint, even though I don't play the army itself. Only thing that was a let down with the release was the lack of troops...cause really those look horrible. I hope they redo them in a second wave!

Looking through the magazine ignited quite the hobby spark. I just wanted to sit down and paint, Lots! So I picked up my poor unfinished Pink Horros and gave them their very last details and some bases: 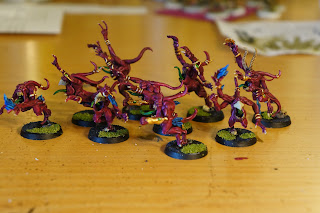 Ofc I now also realize that I forgot to give them neat looking eyes. But I'm gonna say that they are done anyways! ;) I'll fix that when I get back home =)

At the same time I tried out a new paintscheme for my Plaguebearers. I wanted to see if I could do them in just washes, like I did the herald, cause it would be fun with a unit that looks a little different from the ones I already have. So when I had done my first one I thought: yeah, this looks good! Hence I continued to paint all of them like that: 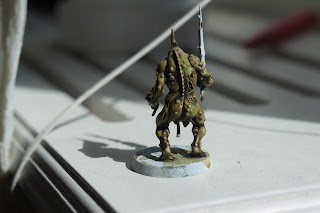 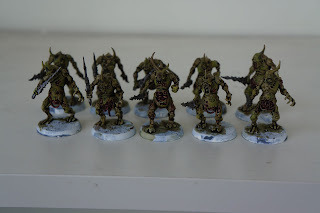 The first one is just to give a better view of the skintone cause it wasn't really showing on the groupshot. I must say I'm quite pleased with the result and now I have only to make their weapons, eyes and other tiny details and then they'll be all done. Really quick! Think it took me, including the time I had to wait for them to dry, like 2 hours. Good speed paint result ^^

So all in all, the time I spent at home with all my paints = a really productive day! Awesome! =)

Also here's the videolog I did the other day:

Hope you have a great evening!!

Posted by TheWarhammerLady at 11:31 3 comments:

Working on a new paint guide...

So after I made the how to paint for the broadside I got a comment on youtube saying I should make another one, but something bigger. So I thought why not a Hammerhead? It might be a good evening activity. ^^
But I have never really painted a tank before and I don't have an airbrush so I'm gonna have to make one heck of a paint job for it to have a smooth surface and look neat! Challenge accepted! ;)

So today I tried out making patterns on a random piece of terrain that I had at home. I know the colors are all wrong, I just wanted to see what it would look like. The technique itself, of making patterns that is, I'm quite pleased with. =) I think with some more practice it might look nice! Lucky for me I have lots of random pieces lying around that I can practice on before covering a hammerhead in marking tape and going bananas! ^^
Here's what the first try looked like: 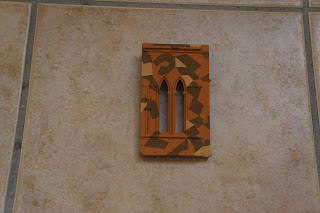 Now I'm gonna start working on a videolog to do later tonight!

//Sara
Posted by TheWarhammerLady at 08:20 No comments:

How to paint a Broadside

Here's the How to paint guide for the Broadside. Granted I have already posted it on youtube a few days earlier but anyways:


I know I have been absent - have had a few things that needed taking care of and so hobbying was left on the shelf for a few days. But hopefully all done now!
Yesterday I played a really quick game against Tau. I say quick cause it was over sooo fast. My daemons were sent back into the warp faster than I could say: Blood for the blood god. Worst ever xD But it was a stoke of luck for the Tau player and some bad luck on my part so I can't say for sure that I hate Tau just yet ^^Need a rematch. And I also need for him to finish painting them soon so that I can show you when I WIN (ah yes, sweet revenge I shall have!)
I decided to go with 2 groups of plaguebearers (10), 10 bloodletters, 10 daemonettes, 20 pink horrors, 3 screamers, Pinky (soul grinder), 1 herald of nurgle and 1 herald of slaanesh. Basically I just wanted to field all my troops xD It was an awesome feeling with all those daemons on 1000p, even if I did loose ^^

I hope you all have been getting some more hobby time in than I have! =)

Posted by TheWarhammerLady at 11:44 6 comments: 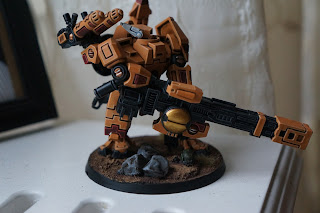 yay it's finally done! With a base and everything ^^ No I just have to take some better pictures tomorrow and get started on the tutorial :)

//Sara
Posted by TheWarhammerLady at 12:16 6 comments:

Yes you guessed it I was on a tiny break for a few days. Been spending time with friends and painting the Broadside - the lining took way longer than I had anticipated, not really used to doing lining so I guess that's why ^^

It turned out neatly anyways: 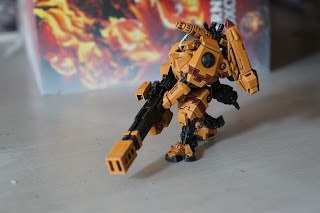 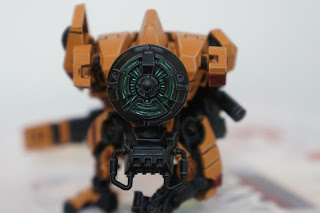 Now all that's left to do is to give it a very neat little base! Since I am making this for someone he does have specific requirements and so I have to wait for him to tell me how to use weathering powders and other scenic stuff before I can finish it off. Might be today but most likely tomorrow :)

This weekend I was supposed to have played Warhammer with my friends but we ended up trying out Super Dungeon Explore. It's a board game made by Sodapop miniatures and it's really good! We ended up playing it three times instead of doing anything else x) 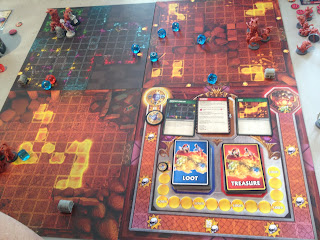 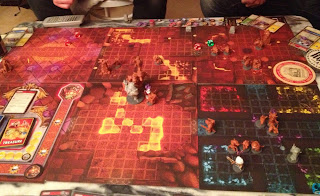 Also I went to GW to be in that painting competition I talked about earlier: 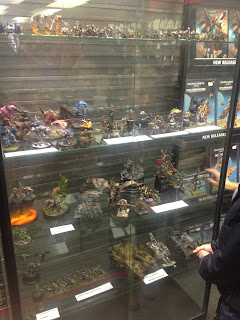 Sorry it's just a crappy photo from my camera. There was quite a few entires actually! And so many neat ones! ^^
I did win one category though! With my 20 saurus warriors from my very non-finished Lizardmen army. Granted it was only mine and one more entry but it was still fun ^^ Also I placed third in 40K squads. With my Nurglings! Glorious! ^^ All in all it was really fun entering and seeing more than my own models for a change. Now I have to find a model to work on for a year so I can enter it and win a category with more than one other competitor! ^^ Wonder which one would be the most fun..hmm...

And oh yeah, before I forget, the very last part:

Posted by TheWarhammerLady at 01:44 3 comments:

Today I'll be making my last video for the Tau review. Kinda sad, now I have to wait for another codex to come out to do a new one! But seeing as it seems the next release from GW seems to be High Elves well then that could be a while.

Anyways, the Broadside is coming along just fine! 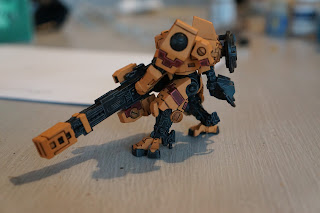 Though I was a tad sloppy with the dark lining so I'm gonna have to redo some parts! I mean after all it's not my broadside so I have to make it look like his - and damn that one looks good! x) When the broadside is done I'll post a picture of both of them so you can see what I mean ^^

Speaking of neat looking models! Yesterday I went to Gothenburg and the local GW store. They're hosting a local painting competition called the Fang and I figured I'd entered. Maybe I should have checked the competition out before doing that though...heh...ah well, you never know until you try no? :)
I entered Pinky, Kairos, 6 nurglings and the herald of nurgle for 40K and my slann, 20 saurus warriors and a skink priest for the fantasy part. My daemon shelf feels a bit empty now that they are away on a trip. :/ But they'll be back tomorrow so it's not for long :)

Now I'm off to be productive!
Have a nice day
//Sara

Posted by TheWarhammerLady at 01:27 3 comments: